Vorticity/circulation/lift generated by circular cylinders may appear exotic to people because we live in air and see only lifting surfaces (bird/airplane wings, sails, propellers, paddle wheels, etc). In reality, however, most objects moving in fluid have a bluff body with some surface roughness and a tail; from tiny (sperm) to gigantic (whale) objects. Fish actually use vortex induced vibrations (VIV) to propel forward and to swim in schools. VIVACE emulates marine life kinematics, which makes it environmentally compatible. 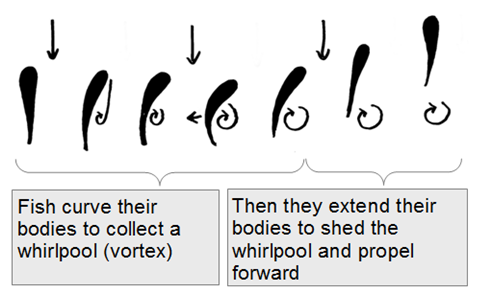 Past research and development has resulted in the development of a device that is capable of harnessing this natural power of VIV in a controllable manner, resulting in generation of clean and renewable electric power in an environmentally compatible way. VIVACE can be placed in a river or ocean current to extract energy from moving water. This converter is unlike any existing technology, as it does not use turbines, propellers, or dams. VIVACE converts the horizontal hydrokinetic energy of currents into cylinder mechanical energy. The latter is then converted to electricity through electric power generators. Cylinder oscillations are rather slow – about a cycle/sec - creating no direct physical threat to fish -- they can navigate around the cylinders.

The above video shows fish swimming behind the Oscylator-4 energy converter. The video was recorded July 12, 2017 around 7 PM in the St. Clair River in Port Huron Michigan. The video is condensed from a period of about 1 hour to show the fish behind the converter.